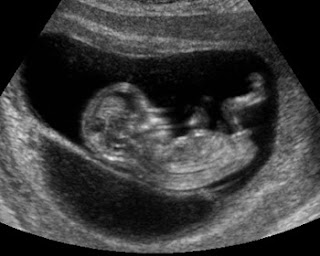 I will never forget that day in the Dr.’s office. It was the day I saw the first image of my son
on an ultrasound machine. There he was, as clear as could be, a baby. He was not a blob of tissue
nor some sub–human cluster of insignificant cells. The Dr. did not say, “There is the fetus.” Instead,
he said, “There’s the baby.” He then carefully showed us every possible angle.

The previous months had been life–changing. Kristie and I were both lost and in need of
Jesus Christ. We were unmarried and now she was pregnant. We were both young, misled, and
uninformed, me more so on the uninformed part. The thought of having a baby at that stage of my
life seemed quite inconvenient. I could think of a million reasons why it would not be a good thing. I was too young and so was Kristie. We both had our whole lives in front of us. We both had dreams and desires and plans. Add to this, according to the world, this was an “unplanned” or “unintended” pregnancy.

I approached Kristie one day and suggested that we should consider an alternative route. I
suggested we consider having an abortion. After all, this seemed to me, to be the most logical way to go. It seemed, to me, best for everyone involved. Kristie looked at me like I was absolutely nuts. Looking back she was right. Abortion was never an option for her, even though it had been suggested by more people than me. I conceded to Kristie’s adamant conclusion that abortion was not an option.

And so, there I was now looking at an ultrasound screen weeks later. It was a day that I can
pinpoint as a moment when God began to change my heart. I knew the moment I saw that image on the screen (Kristie even before then) that I loved that child with all of my heart. It was amazing how one image destroyed all of the lies I had believed about the status of a child in the womb.

A couple of years later Jesus Christ radically changed my life. He used that little boy to get
my attention and to point me to my need of a Savior. Yesterday, I watched that little boy, along with his friends and fellow DV8 folks, as they led our church in worship. I am completely overwhelmed by the goodness and grace of God. I am thankful for my son and I am thankful to God for capturing me by His sovereign grace. I am thankful that part of God’s gracious work in capturing me was an ultrasound image that allowed me to my son for the first time.

Statistics show that a woman (and a man) who sees an ultrasound of her baby is most likely
to be convinced of the personhood of her child, and not follow through with an abortion. I can
certainly understand why. It is the same change of heart I had, along with Abby Johnson, a former director of a Planned Parenthood clinic, who walked away from her career as an abortion provider after witnessing an ultrasound guided abortion (http://www.abbyjohnson.org).

Last week, Yvone Genest of the Pregnancy Resource Center of Walton was here with us.
She told about the clinic’s current process of being converted from a resources center to a medical clinic which will provide free ultrasounds to expecting mothers. I believe this will further aid the center in its goal to help save lives for the glory of God. Will you join me in praying for and financially supporting this great work. Many of you picked up a baby bottle for the “Baby Bottle Boomerang.” Please prayerfully consider the amount God would have you to give and return those to the church. Also, you can visit the center’s website at prcwalton.com to make a contribution and to see other ways to be involved. God bless each of you.
Posted by Jeff Box at 1:40 PM No comments: