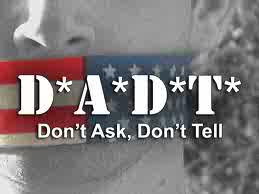 Today (Sept. 20), marked the official end of "Don't Ask, Don't Tell" (DADT), a policy implemented in 1993 as a compromise between those who wanted to allow open service by homosexuals in the military and those opposed to it. The end of DADT marked a significant victory for the Obama administration as the fulfillment of a campaign promise made by the Senator in 2008.

I guess I could spend my time here lamenting this event. Certainly it troubles me. I could spend time pointing out the biblical mandate of the one man/one woman marriage relationship and the sinfulness of homosexuality. But, as I am well aware, I am preaching (actually writing) to the choir. Therefore, let me focus on something the choir (including myself) needs to hear.

I fully support the end of a "Don't Ask, Don't Tell" policy. Now that i have your attention, let me explain. I am certainly not talking about the military policy, but another, more sinister DADT policy. The one I speak of is an unwritten policy, practiced not by the government, but by the local church. I am referring to the DADT policy in regards to evangelism, lovingly sharing the gospel of Jesus Christ with a lost and dying world.

You see, such things as the end of the military's DADT policy are simply symptoms of a larger problem, the ever increasing spiritual lostness of American culture. Homosexuality is just one among a mulititude of sins for which Christ died. The answer to lostness is the Gospel of Jesus Christ. But this Gospel must be proclaimed in order for the spiritual lostness to be impacted. In Romans 10, Paul wrote, (13 For "everyone who calls on the name of the Lord will be saved." 14 How then will they call on him in whom they have not believed? And how are they to believe in him of whom they have never heard? And how are they to hear without someone preaching?...ESV). We must understand this truth, unless we preach, they will not hear. If they do not hear, they will not believe. If they do not believe, they will not call on His name. If they do not call on Christ, they will not be saved. The eternal destiny of millions is at stake. So, lets put an end to the church's DADT policy and proclaim Christ, that His name will be glorified among the nations, and multitudes will join us in praising Him for eternity. (Rev. 7:9 After this I looked, and behold, a great multitude that no one could number, from every nation, from all tribes and peoples and languages, standing before the throne and before the Lamb, clothed in white robes, with palm branches in their hands, 10 and crying out with a loud voice, "Salvation belongs to our God who sits on the throne, and to the Lamb!" 11 And all the angels were standing around the throne and around the elders and the four living creatures, and they fell on their faces before the throne and worshiped God, 12 saying, "Amen! Blessing and glory and wisdom and thanksgiving and honor and power and might be to our God forever and ever! Amen").
Posted by Jeff Box at 9:20 PM No comments: