A "Morning After the Election" Thought

The election is over!!! I am very thankful for that fact. Now we have a newly elected President who will take office in a few short weeks. Congratulations to President-Elect Barack Obama. As my President he will certainly receive my prayers as he takes over for the departing President Bush. In fact, after listening to his acceptance speech last night, I prayed for him before drifting off to sleep (Yes I did sleep like a baby...because God is King!!). Furthermore, I will support him as President up to the points in which my Bible says I can’t. Since he is the most liberal President in our history there will no doubt be many points of contention. 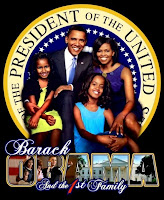 There is a part of me that wants to be happy. For the most part, it has seemed next to impossible for a non-white candidate to be elected. As I sat there holding by “bi-racial” baby boy, it is great to know that he too can be President some day (He is basically the same “race” as Mr. Obama). I watched as Jesse Jackson and Oprah Winfrey cried tears of joy last night, and listened to other civil rights leaders celebrating that Dr. Martin Luther King’s dream had come true (Excerpts from his “I Have A Dream” speech have been rolling all morning). But let us not be deceived to believe that race is an issue of the past, that we live in a post-racial world. Sure there were no doubt many (myself included) to whom race was not an issue. I would love to say that Martin Luther King’s dream had come true; that the day has come when little children can live in a country “where they will not be judged by the color of their skin but by the content of their character.” I would love to believe that Colby could one day be elected President and race would not be an issue. It shouldn't’t be! After all, there is truly only one race, the God created human race, descendants from Adam. Wouldn't it be great if America (especially our churches) came to understand that reality!! Yet that is not America. In fact, race played a great role in this election. There were masses who voted for Mr. Obama simply because he is “black” and others that did not vote for him for the same reason...and both while confessing to know very little about the content of his character. Both are equally racist.

I have also listened as news reporters have conceded that we know very little about our President-Elect. That is true and what we do know is not very flattering....in fact it is quite frightening. For instance, we know that he promised Planned Parenthood that one of his first acts of business would be to sign the Freedom of Choice Act which promises to get rid of all abortion restrictions and take abortion to unimaginable levels. That alone is enough to sicken my stomach. As I held little Colby last night, sleeping in my arms, that was the issue that overshadowed everything. Our new “Pro-choice” President supports the slaughtering of babies in their most innocent form, and has promised to expand those killings. Dr. John Pike of the Master’s College wrote, "The phrase 'pro choice' which is what the pro-abortionists use, strikes me as one of the most depraved apocalyptically wicked rhetorical facts in the history of western civilization in the Christian era. The phrase means 'pro sin,' or free to choose sin. The phrase would actually be less dreadful if it were 'pro abortion,' because that would confine it to the sphere of a particular moral problem. But by turning it to what seems a euphemism, the pro-choice people have rung the final rhetorical death bell to the entire democratic experiment. The phrase 'pro choice' means without conscience, or without inhibition, or without restraint. And it parades itself under the Jeffersonian banner of liberty of conscience and separation of church and state. As a rhetorical gesture, perfectly designed to function as a political banner, this phrase constitutes the last word, the official formulation of official apostate defiance against the God of Christianity. I'm confident that God will answer it apocalyptically."

The only hope for America is the Gospel, the true Gospel, not the fluff Social Gospel that has produced so many who think they can live as they want as long as they say they love Jesus. The true Gospel is the message that we are all violators of God’s holy law. We have broken God’s Commandments. We have failed to put God first, we have created an idol god we are more comfortable with, we have taken the name of God in vain, We have failed to keep the things of God holy, we have dishonored our parents, we have killed (anger is considered as murder too), committed adultery (lust in the heart is adultery too), we have stolen, we have lied, and we have coveted. And a good and just God will make sure that sin is punished. That is where Jesus stepped into the court-room on our behalf. He suffered and died in our place, paying our fine. Now God can legally dismiss our case. Our responsibility is to repent and trust in Jesus. If we reject we will receive due punishment for sin in Hell. As Adrian Rogers once said, “Our sins will either be pardoned by Christ or punished in Hell!” Too long have we neglected that message in exchange for a “no strings attached, non-confrontational, lamb barbeque” fluff message.

To my Christian friends I plead with you that we must preach the Gospel and we must preach it as individuals. We all bear this responsibility. That is the way to transform a culture. With an increase in soundly saved Christians there would indeed be radical change in our country. As Ray Comfort put it in his blog, “The answer to the issue of abortion isn’t just to protest, although that's a start. A nation that kills 50 million of its citizens through abortion with no qualms of conscience needs more than a voice of protest. We are no different than Nazi Germany. We have given ourselves to the wickedest of sins, and that will eventually have terrible national consequences. We desperately need God’s forgiveness, and we need a new heart that can only come with conversion. Only the gospel can take a self-righteous, blaspheming, idolatrous, hypocritical, baby-killing nation, forgive it, and make it brand new.”

As for the future with our new President, he made many other promises during his campaign, many of which sound very much like Socialism (all pailing to his abortion promise). He promised to change the world....whatever that means, it will not be for the better. Most of his promises have sounded like threats to me. Yet in spite of that, his promises resonated in the ears of those who went to the polls and voted for him, many professing to be Christians. Last night people stood and chanted, many mesmerized in what appeared to be a state of worship. So here we are. He has been elected. The confetti has fallen. The celebration has begun. It brings to mind another quote from Dr. King who said, “The ultimate measure of a man is not where he stands at times of comfort and convenience, but where he stands at times of chaos and controversy.” The media has given Mr. Obama a cocoon of comfort and convenience, but in January he will step into a world of chaos and controversy as President of the United States. Boy, we have come a long way!!!