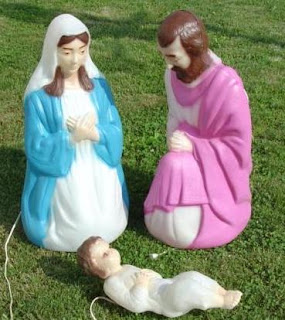 1629 Bay Street in Greenville, MS. That was my grandparents address for much of my childhood. I remember that address because we lived at 1631, right next door. This gave me one gigantic yard to play in. Grandma’s yard was my yard too.

I will never forget Christmas time in that neighborhood. Some of my greatest Christmas memories with my family took place on good ‘ole Bay Street. We would all meet at Grandma’s house on Christmas Eve. There would be so many people that the house would get really crowded. It was fun, but sometimes you just had to walk outside for fresh air, or to escape the crowd for a moment.

One of my favorite places of escape was to Grandma’s nativity set on the front lawn. We were not allowed to touch it. But when everyone was crowded in the house, it made for a great time to sneak out there and pick up that plastic baby, with a light bulb stuck in his back.

I was sure that plastic baby represented something great. The only thing I knew about him was that his name was Jesus, and he came to save us from something, and he obviously wasn’t born at Delta Regional Medical Center. One of my cousins told me once that we probably shouldn’t pick him up and play with him anymore because she had heard he was God. That was a scary thought. I certainly didn’t want to get God mad at me.

Over time, I began to learn the truth that this little plastic baby represented God’s love. God the Son physically came to earth and took the form of a man. He came because God is holy and man is not, because of sin. He came because sin had separated man from God. He came because sin had to be punished. He came to take our punishment for us on a cross. And even greater than being able to touch a plastic baby image of Him, He desired to touch me and hold me and call me His. This Jesus wanted to not simply be a figure on our lawn for one season each year, but to be the very real constant companion of our lives. He desires to save us by His grace and to walk with us and talk with us and to declare that we belong to Him.

One day all of that penetrated my heart. I repented of my sin and put my trust in Jesus Christ, not the plastic figure, but the real life Savior. He saved me by His grace and transformed my entire outlook on life. Suddenly, I was no longer Jeff Box, living a meaningless existence. In one saving act, I was now Jeff Box, redeemed and treasured son of the Most High God.

Well said my friend!
Funny how we see things as kids. :-)