The Battle For The Beginning 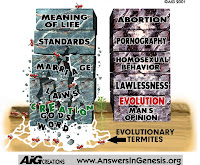 In Genesis 1-3, we are given the account of Creation and the Fall of mankind. There the Bible tell us that God created the world in SIX LITERAL DAYS. In fact the terminology of the text is very clear. Sadly many within the church have tried to squeeze man’s faulty idea that the earth is millions of years old into the text. For instance in the Scofield Study Bible, the footnotes for Genesis 1:5 make an attempt to force a "possible" interpretation upon the text that the text itself simply will not allow. Scofield suggests the possibility that a day could refer to a period of time marked off by a beginning and an end. The problem is that everywhere else in the Bible where the same terminology of Genesis 1 is used, and particularly when marked off by the terms evening and morning, it always refers to a literal day. The amazing thing about this is that the questioning of the word day is limited to Genesis 1. Noone, for instance questions whether Joshua marched around Jericho for seven days or for millions of years, nor do we assume that Jesus rose from the dead millions of years after He died. The Hebrew word for day yom is used 2301 times in the Old Testament and the meaning is only questioned in Genesis. In fact the word is used 410 times with a number, 38 times with evening and morning without a number, 23 times with evening or morning with the word day, and 52 times with night used with day. In all of those instances it refers to an ordinary day. In Genesis 1 the word is used with both evening & morning and a number. For instance, Genesis 1:5 says, "There was evening, and there was morning---the first day" (Emphasis mine). The text is screaming that these are ordinary days.
That the Earth is millions of years old is based on nothing but a skeptical and unprovable hypothesis. In fact, when the evolutionist gets rid of his bias and looks at the scientific evidence in truth, he will see that there is absolutely no conflict between the scientific evidence and the Bible. Instead the Bible offers the true explanation. John MacArthur noted, "Indeed, all the geological, astronomical, and scientific data can be easily reconciled with the biblical account. The conflict is not between science and Scripture, but between the biblicist's confident faith and the naturalist's willful skepticism. To many, having been indoctrinated in schools where the line between hypothesis and fact is systematically and deliberately being blurred, that may sound naive or unsophisticated, but it is nonetheless a fact. Again, science has never disproved one word of Scripture, and it never will. On the other hand, evolutionary theory has always been in conflict with Scripture and always will be. But the notion that the universe evolved through a series of natural processes remains an unproven and untestable hypothesis, and therefore it is not "science." There is no proof whatsoever that the universe evolved naturally. Evolution is a mere theory--and a questionable, constantly-changing one at that. Ultimately, if accepted at all, it must be taken by sheer faith."
Indeed, the evolutionist by faith, assumes that, for instance, the Grand Canyon came to be by a little water and millions of years. Furthermore, they would point at rock layers and, because they are so committed to the idea of millions of years, will assume that the rock layers are evidence for their theory. Yet, when one looks at Scripture and understands the concept of a global flood (with its accompanying tsunamis, etc), the reality that a such an event would change the not only the landscape, but would also leave a trail of rock layers and fossils becomes quit clear.
We are in the midst of what has been called the "Battle For The Beginning" and it is an issue in which the church simply cannot bend. The moral fiber of our nation is being systematically stripped as biblical authority is being thrown out and replaced with an indoctrination of a humanistic and evolutionary worldview. It is time to take a stand. Visit Answers In Genesis at http://www.answersingenesis.org/. The ministry provides many helpful tools to equip any Christian in defending the biblical account of Creation.
Posted by Jeff Box at 10:06 AM